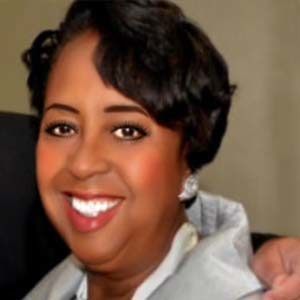 Edna Louise Borders is a servant of God, the matriarch of the Borders family, a stalwart  pillar of Ohio, and a business and political leader. Born in Akron, OH, Edna is the  youngest of nine children and is the matriarch of the Borders family. A graduate from Garfield High School, Edna studied Business Administration at the University of Akron  and she is beloved to those in the community and fondly known as “Auntie Edna”.  Forced to drop out of her university studies due to her late mother’s illness, Edna worked  for BF Goodrich in the Employee Benefits Department. She continued working there until  the company ceased Akron operations in 1986. Following the death of her mother and her  transition from BF Goodrich, Edna began working at the County of Summit in 1987.

As a volunteer, Edna has helped to bring some noteworthy individuals to Akron for presentations, speeches,  and engagement including Susan Taylor from Essence Magazine; former Mayor of Cincinnati and talk show  expert, Jerry Springer; and past Attorney General for the State of California and current US Senator Kamala  Harris.  Edna works as a civil servant and community activist. She oversees many  fundraisers and special events. She uses her biblically grounded knowledge to help coach and aid women  managing and overcoming issues like racism and discrimination, abandonment, harassment, bullying, and  death. Edna is a God-fearing woman, a loyal aunt, friend, and volunteer. She ensures that her family and  each project she works on is filled with fierce love and compassion.  Edna is the loving aunt of over 40 nieces and nephews. Additionally, she is the mother to her fur-baby Sasha,  a Rottweiler German Shepard mix dog.