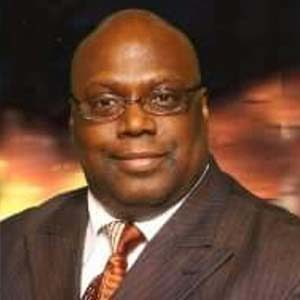 Willie Perrymen is Prresident of the Toledo NAACP and the Senior Pastor at Jerusalem Missionary Baptist Church. He has spent spent more  than two dozen years in ministry and is focused on bringing some attention back to the work of the NAACP and the work of the Church because that’s where the civil rights movement began.” I’m looking forward and I’m going to just ask everyone for their support that we may heal our community where it’s needed.

Dr. Perryman received his undergraduate degree in Religious Studies from The International Bible Seminary of Plymouth, Florida; as well as from The American Bible College of Nashville TN, from the Extension Program here in Toledo, Ohio. He received his 1st Doctorate of Divinity (D. Min.) from the Tennessee School of Religion (Detroit, MI. Campus) in May 2000. Dr. Perryman was confirmed for his 2nd Doctorate in Pastoral Theology (Th.D.) from The Andersonville Theological Seminary, Camilla, Georgia in May 2012.

Pastor Perryman previously worked for the State of Ohio Department of Transportation Division of Special Projects in Bowling Green, Ohio for thirteen (13) years as an accounting clerk serving eight (8) Northwest Ohio Counties. He was appointed to work for the City of Toledo where he proudly served four (4) years as a Mayoral Assistant to the first African American Mayor (Jack Ford) for the City of Toledo in the Department of Neighborhoods.

He opted for early retirement as the first African American Commissioner for the City of Toledo Water Distribution Division to concentrate and focus on the growth of the church and the construction of Phase I of the Jerusalem Baptist Church Building Project. Pastor Perryman has returned to governmental work as a Special Projects Coordinator for the Lucas County Board of Commissioners.

He has served in numerous Religious capacities: Past Chairman of Moderators, The Ohio Baptist State Convention Inc. past Moderator, Ohio New Life Baptist District Association; past Board Member of Toledo Metro Churches United, Alumni Association American Baptist College; past Lecturer Baptist Minister’s Foresight of Toledo and Vicinity. Civic Chairman for The Baptist Minister’s Conference of Toledo & Vicinity. Currently serves as Chairman of the Pastor’s Committee of The United Pastor’s for Social Empowerment. Former Vice President for the Interdenominational Ministerial Alliance of Toledo and Vicinity.

Pastor Perryman’s community service is wide-ranging, former member of the Steering Committee for ONYX (Organized Neighbor for Yielding Excellence). Past board member for Toledo Head Start Task Force and Substance Abuse Alcohol Clergy of Toledo. Former board member for (EOPA) Equal Opportunity Planning Association. Committee member with Citizens for Jack Ford, Citizens with Councilmen Michael Ashford and as well as a Community Liaison for the organization Toledo Grows.

He served as a Steering Committee member for the City of Toledo 2015-2020 Consolidated Plan. He currently is serving as Vice President of Board of Directors of The Family House, the second largest homeless Shelter in the State of Ohio serving the entire family. He also served as a Steering Committee Member on the “Full Circle” Steering Committee. He currently serves as a member of the Family Service Planning Committee, which serves low to moderate income residents of Lucas County .He serves as an Executive Member of the (IMA) Interdenominational Ministers Alliance as well as the NAACP. Dr. Perryman has recently been assigned as a Team Member for the Lucas County Board of Commissioners COVID-19 Donation Center, where citizens of Northwest Ohio are assisted with needed supplies during these difficult times.